Why Does A Wheelbarrow Have One Wheel? 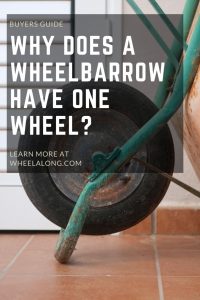 With the sheer amount of wheelbarrow options on the market today, we have become accustomed to seeing these pieces of garden equipment with two or more wheels but in a traditional sense, a wheelbarrow only has one wheel.

But why does a wheelbarrow have one wheel and what are the advantages of using this design?

In this article, we are going to explore the answer to these questions giving you a clearer picture of why and how a one-wheeled wheelbarrow can benefit your gardening arsenal.

The History Of The Wheelbarrow 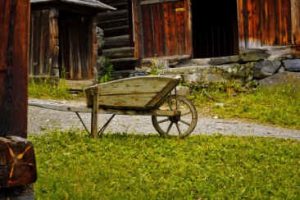 It may come as a surprise to learn that the wheelbarrow is far from a modern tool and humans have, in fact, been using these handy wheeled sidekicks for many thousands of years.

As far back as ancient Rome, Greece and China, there has been evidence that wheelbarrows were used for many of the purposes they are used today – mainly carrying loads from point A to point B.

However, whilst the ancient Chinese wheelbarrow featured what we commonly see today – a single wheel, some of the other old designs were far more obscure – imagine a sail on a wheelbarrow – yes this actually happened in some civilisations and it’s pretty innovative when you think about it.

The wind would guide the wheelbarrow to its destination without much effort from the person doing the steering.

But, we’re here to explore why a wheelbarrow has one wheel and when we look back in history, one of the first things that we notice is that materials would have been very limited in ancient times when this piece of equipment was first invented.

Whilst today we have access to a range of materials at a reasonably low price, wealth would have been needed to fit two wheels on a wheelbarrow and this just wasn’t good enough for the ancients.

So, they compromised, and, rather than attaching two wheels, one on either side of their wheelbarrows, they fitted a single wheel in the centre of the device. As it turns out, this certainly had its advantages.

Reasons That The Wheelbarrow Has One Wheel

Thanks to the ancient civilisations lack of resources, our modern-day one-wheeled wheelbarrow  (try saying that with your mouth full), does provide us with some, perhaps unintended, benefits.

One of the main points to think about is that a wheelbarrow needs to be able to evenly distribute its load weight between the vessel itself and the person pushing it. This can be done with two or more wheels, but it is much more easily achieved when only installing one, central wheel.

As a result of this, when we push our wheelbarrows along, we are much more easily able to balance them. Whilst they may topple over without a support rack when left standing still, the balance of the equipment us far greater when on the move when we only use a single wheel. 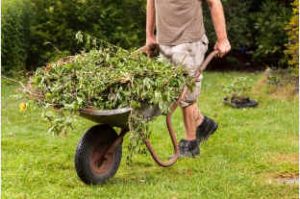 Have you ever tried to move a two-wheeler or a four-wheeler barrow across the garden, construction site, or wherever else you may be taking it for a spin?

If you have, you will know that navigating corners and turns can be comparable to a nightmare and if you have to make your way across uneven ground, you can forget it.

It would make sense, then, that a wheelbarrow with just one wheel is much easier to manoeuver, especially on ground that is rocky, uneven, slippery, or otherwise. There are two reasons that movability is improved when using a single wheel:

Whilst a two or four-wheeled wheelbarrow is perfect for use on flat ground, it is not very often that you will come across a garden or other outdoor space that will be perfectly flat and so it makes sense to keep the traditional one-wheeled design.

Imagine trying to tip up a wheelbarrow that sits on two or more wheels compared to emptying one that sits on just the one wheel. Basic physics dictates that a single wheel can almost be used as a way of lifting and propelling the load forward, making unloading the wheelbarrow far easier.

Many two-wheeled options come with a motorised dumping feature – almost like a mini dump truck that you would see on a construction site and whilst these are effective, they are also much more expensive than a traditional wheelbarrow. Which brings us onto our next point.

The people in those ancient civilisations that we discussed earlier on certainly had their heads screwed on when it can to being frugal – it’s unlikely that we would have today’s wheelbarrow design if they hadn’t have used their cost-effective methods.

The modern wheelbarrow comes in a variety of prices ranging from extremely cheap – and often not very long-lasting, all the way through to motorised designs with a wealth of features that can literally break the bank – and everything in between, of course.

However, it takes nothing more than a quick Google search to see that the most affordable wheelbarrows are those that feature that traditional, one-wheeled design.

If you are looking for a simple wheelbarrow that does nothing more than move your goods from one point to another, then a cheap one-wheeler is the most viable option. Even those that have a few more gadgets and gizmos come in a lower price bracket if they only have one wheel.

Most of the wheelbarrows that we see today, especially those with a traditional design come in a triangular shape. If manufacturers were to put two or more wheels on this shape, it just wouldn’t work.

If you want more wheels, you need to change the design and for this reason, it’s rare you’ll see a two or more wheeled wheelbarrow that isn’t square or rectangular in shape. Your traditional triangular-shaped wheelbarrow with sloping sides will almost always have one wheel.

It goes without saying that, like any piece of garden equipment, if you want your wheelbarrow to stand the test of time, you are going to need to look after it.

One of the key aspects of taking care of your wheelbarrow is to ensure that its wheels are in full working order and with only one wheel, this translates into less maintenance.

So, Which Is The Better Option?

When it comes to wheelbarrows, there is no superior design.

The fact of the matter remains that even though the traditional design dictates that this piece of garden equipment should come with just one wheel, our modern needs and technology have given us a range of different wheelbarrows that can be used for different purposes.

Your needs will depend on the number of wheels that you should go for. Think about the following things when deciding between a one-wheeler and a wheelbarrow with two, three, or four wheels.

Now that you have a good idea of what you need from a wheelbarrow, you can make a more informed choice as to how many wheels you are going to need – let’s look at this a little more closely.

We have already seen the benefits of a wheelbarrow that has one wheel so if you are going to be working on the ground that is uneven then this is usually going to be the better option.

That being said, you need to be in relatively good shape to be able to properly control a one-wheeler since you are going to be responsible for bearing half of it’s loaded weight.

This may sound like an easy task but when you are moving on an uneven surface, keeping the balance of the wheelbarrow is no mean feat. It can be a very strenuous work.

Additionally, you may benefit from a one-wheeled wheelbarrow if you are working in a smaller area that has tight corners to navigate. This type of wheelbarrow will effortlessly move through twists and turns and, when empty, can even be tilted almost sideways to get through the tightest gaps.

Finally, your traditional wheelbarrow with a single wheel is ideal if you only have smaller loads. One of the reasons why many people opt for this type of wheelbarrow in the garden is that, for the most part, they only need to move plants, veggies, grass cuttings and other light loads, making this an easy way to do so.

Two or more wheeled wheelbarrows can come in all shapes and sizes and, whilst they may not feature the traditional design, they do have their advantages. They may not be as easy to move around as their one-wheeled cousins but when it comes to shifting heavier loads, they certainly take the upper-hand.

When you fill a one-wheeler with a heavy load and then try to keep it balanced it can prove impossible, at best it can be quite the workout for the person pushing it. In contrast, more wheels offer greater stability making heavier loads much more easy to transport, and if you are using a motorised option, it’s even easier.

What’s more, additional wheels mean that you have greater control over the wheelbarrow, therefore, it can be just as easily operated using one hand – something that would not be at all possible with one wheel. This is ideal for those who need to multitask whilst working,

Of course, if the one-wheeled option is best for rugged terrain, that must mean that its two-wheeled counterpart works well on flat surfaces, and you’d be right in thinking so. If you are working on level ground, a two-wheeler is a preferable option.

However, it is worth noting that if there are multiple turns involved, it may prove a little more tricky.

It can sometimes feel as though there is too much choice when it comes to wheelbarrows – despite what you may first think. One of the choices we are given is how many wheels we would like our wheelbarrow to have.

In a traditional sense, wheelbarrows come with a single wheel and this has been the case for many thousands of years, as we see evidence of these vehicles being used as far back as ancient Greece. Whilst our ancestors may have installed a single wheel as a way to cut costs, this design has carried through to the modern-day thanks to its functionality.

So when we ask the question ‘why does a wheelbarrow have one wheel?’ We can answer it with six simple points:

Whilst there are many options for wheelbarrows with more wheels, these six factors demonstrate that the traditional design was and always will be, versatile, useful and quite simply, rather incredible. 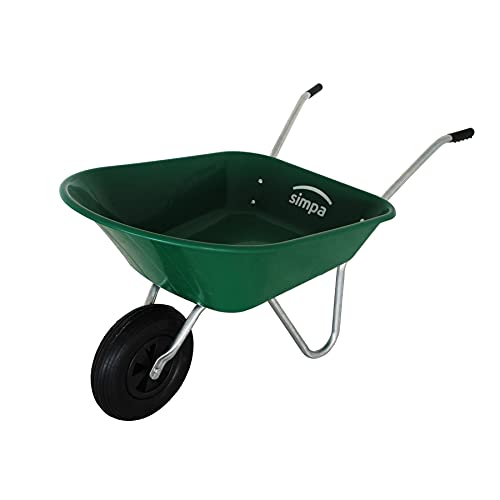 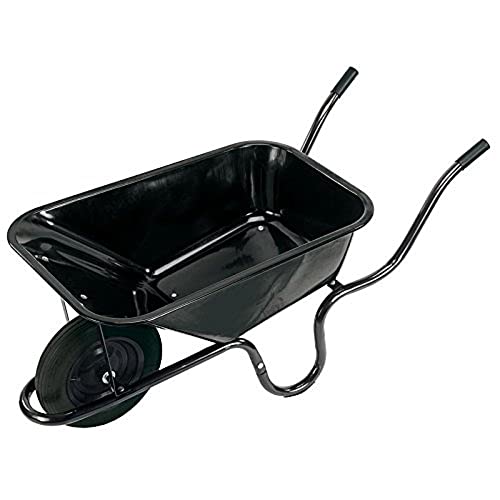